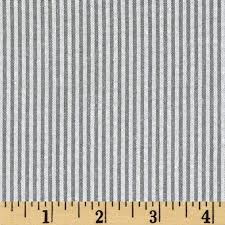 Before we learn about my Metallic Seersucker Capris, let’s first learn about Seersucker, shall we? Evidently it’s back. (Or it was back in 2012. I’m a bit behind.)

From Wikipedia: “The word came into English from Persian, and originates from the words sheer and shakar, literally meaning “milk and sugar”, probably from the resemblance of its smooth and rough stripes to the smooth texture of milk and the bumpy texture of sugar.[1] Seersucker is woven in such a way that some threads bunch together, giving the fabric a wrinkled appearance in places. This feature causes the fabric to be mostly held away from the skin when worn, facilitating heat dissipation and air circulation. It also means that pressing is not necessary.”

Can I just say I find that kind of fascinating? Fabric that channels lumpy sugar; keeps you cool, and doesn’t need ironing! I’m all in. Of course some clothing designers can’t leave well enough alone and added a bit of bling to a nifty pair of capris. I wasn’t looking for seersucker on my search for a LBD to wear at the wedding in St. Augustine. I was, however looking for a comfortable pair of capris for the plane. Shorts are too cold and (I think) tacky on a plane. Plus placing my bare thighs where countless others have gone before bothers me on a plane. (Not in a restaurant, though. Go figure.)

I prefer to wear capris when I’m traveling in hot climates but my favorite capris got irreparably stained and had to go. So, when I saw the seersucker navy/white capris in my size at a more than reasonable price, I bought them. I said “Yes!” to the capris before I knew that was going to be my philosophy. And I love them. Mostly. At the store, I wasn’t aware that I had purchased metallic seersucker capris. Wearing them to work, I realized they sparkled a bit and since I’m not a sparkly kind of woman I was taken aback to discover one silver thread between every blue/white stripe. Having already worn them and washed them, I decided I could live with a tiny bit of sparkle and figured that most folks wouldn’t even notice it. 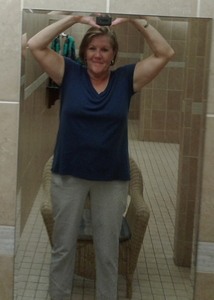 Fast forward a couple of weeks to our travel day. When traveling from Jacksonville to any other part of the country farther north, it’s best to leave in the morning. Our flight was at 5:30 —that’s 5:30 capital A capital M. We aren’t even going to discuss how early we had to get up and off the boat. Still, I was determined to be cheerful and nice to everyone. I made faces at a squirmy two-year-old in line at TSA. I smiled beautifully at all of those who keep us safe in the air. I apologized prettily when I was scolded for not removing my small Kindle from my pocketbook. (Never mind that last year I had been told I didn’t have to remove my small laptop from my bag. Go ahead, change the rules. I don’t care. Let me bathe you in a white light of love.)

And then I obligingly stood in the little round booth, assumed the position, and failed the scan. The photo to the right is a reenactment. Getting scanned by TSA is not a selfie moment. Neither was what followed.

I failed the scan three times.

First, he asked whether I had moved. “Oh, no, sir. I stood perfectly still.” Then he asked if I had anything in my pockets. “Nope.”

And then he showed me the scan. Wow. Again, reenactment. Remember my post about weight loss and that new scanning mirror? 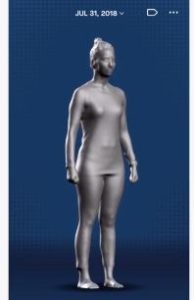 My TSA scan had no definition from waist to ankles. In fact, it looked as though my naked grey self was wearing bright ballooning yellow clown pants. 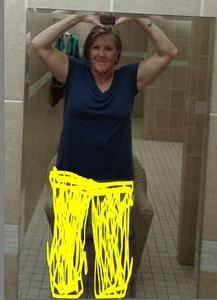 Who knew that silver thread was actually metallic?

Who had a full body pat-down?

My TSA lady was training. Really. It was one of her first IRL full body pat-downs and she was being watched by a female supervisor. It was clear that the trainee was a bit nervous, so I did everything she said, praised her for doing her job so well, and wished her a good career in TSA.

EW pretended I was not his wife.

Say “Yes!” to the Non-Metallic Capris

And that  is why we made a second quick trip to the outlet mall before leaving New York and why I purchased a pair of khaki capris (slightly too large) on sale at Chico’s, breaking my “if-it’s-not-perfect-don’t-buy-it” rule.

Because, capris I can live with for a few months vs another full-body-pat-down?

I’m going with the capris.

Author: Barb
I Said “Yes!” to the Dress
Beaugency, France