Our Forty-Days of De-Cluttering is Nearly Over. How’d You Do? 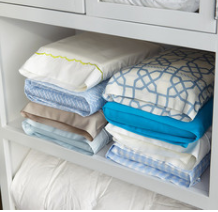 We pledged to get rid of one item a day for forty days. For the Teva Diva, this meant a bag of stuff every week. I also found yet another new method of folding clothes. For me, storing things more neatly is is as important as getting rid of stuff.

Getting Rid of Stuff

I’ve been getting rid of stuff and during our 40-day de-clutter project have filled and removed three bags from the boat, plus I’ve taken assorted single things ashore to give away. I’m happy, but not done, and will try to take a 15-minute break every so often to walk away from the laptop and toss something or clean something.  Actually, I’ll commit to getting rid of stuff or tidying for 15 minutes every weekday. Call me on it.

While most of you don’t and will never live on a boat, some may take up the RV lifestyle, travel more, or simply downsize into a smaller space with less storage. I am often amused by the “Tiny House” movement as I believe that we cruising sailors invented this years ago. (We have met many who set sail 40 and 50 years ago, and I am delighted to follow in their wake and learn from them.) Still, we who live-aboard can learn from all the newbies on You-Tube. 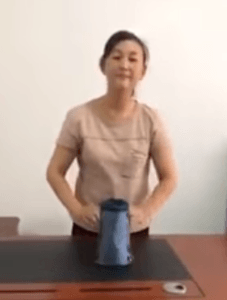 Here’s my problem with the Kon-Marie method: I have been able to fold clothes nearly as well as she does, and freed up a lot of storage space for both me and EW. However, things don’t always stay folded. I travel ashore in the dinghy with my laundry bag and found that my compactly folded shorts, shirts, and pants frequently came undone on the return trip. Plus we have shelves made of netting to promote air circulation. It works great, but isn’t perfectly flat, so things can roll together and the neatly folded items come undone.

Recently, a Japanese folding video showed up on my Facebook timeline and it beats the Kon-Marie method all to heck. Plus I don’t have to “show each item my affection”. (It’s a Zen thing.) There is, just one small problem with the new method.

Yes, I am sure some of you (particularly Lynnelle) are rolling your eyes after watching this video. EW certainly did when he put his clothes away after the last laundry day.) But it works. Stuff isn’t wrinkled and stays folded. (Yep that’s a pair of jeans in that tiny roll.)

I can assure you that this is easy, things stay folded, they aren’t excessively wrinkled, and they take up much less space.

The Problem (Particularly with a Capsule Wardrobe)

So, once we have gotten rid of all things that don’t fit, aren’t useful for our lifestyle, or are the wrong color, most of us will end up with a capsule wardrobe consisting of many things that are like our other things. (Think of Lynnelle’s 7 pairs of black pants.) (And yes, I know she has a great closet and hangs her pants, but it’s a good example.) Once you roll up your items, it’s difficult to see which pair of black pants, or white t-shirt you are pulling out to wear. Now, again, for most of you, this just means you will have to re-fold the wrong item (which can be a pain).

However, I shower onshore and have twice discovered that I had packed the wrong black jeans and the short-sleeved white t-shirt instead of the long-sleeved one. Plus, EW and I have volunteered at a few 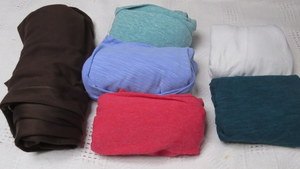 music events and received the same t-shirt. So, when I fold the laundry in this fashion I can’t see the size of the shirt when I get back to the boat. It’s a tiny problem, but it can be a bit of a challenge. EW would not be pleased to find a too-small shirt in his shower bag.  Ah well. we are a work in progress.  This week I will fold EW’s T-Shirts so that they are a bit wider than mine. That works in his drawer and will help me assign them correctly back on the boat.

Confession: When I first started using the Kon-Mari method I placed a rectangular pattern in my laundry basket. The short side was the width of my folded knit shirts, the longer side for EW’s. At right, you’ll see some of my clothes: one brown sweat pant, three short sleeved t-shirts, one blue dress, and one long-sleeved tee. How neat is that?

Yep, our 40-day project has allowed me to reach a new level of commitment. So far, I’ve not tossed anything we need and the closets and drawers are looking much better. How are you doing?

As for the “Featured Image” I’ve actually been using Martha Stewart’s sheet folding method for years. Fold both sheets and all but one pillowcase, and insert them into that pillowcase. Voila!

Author: Barb
Prioritize You
Colonoscopy in a Box. Sounds Interesting, No?

1 thought on “Our Forty-Days of De-Cluttering is Nearly Over. How’d You Do?”